You are here: Home / About

The longtime collegiate coach served as an assistant coach at NCAA Division I Central Michigan for five years, helping the Chippewas to the school’s first-ever Mid-American Conference (MAC) Tournament Championship in 2011. In her tenure at CMU, she also directed the squad on an interim basis in her final campaign.

During her stint at CMU, Beeckman’s guidance helped the Chippewas’ Kelly Maxwell become one of the top setters in the country. Her efforts enabled Maxwell to lead the MAC in assists and rank 11th in the nation as a senior while earning all-conference and postseason recognition. The veteran coach directed setter training and quality control as CMU’s offensive coordinator along with other duties such as coordinating team travel and recruiting.

“I trusted that Tree’s methods were going to get me somewhere and I felt like the training I had under her gave me an edge on the competition,” said Maxwell, who’s currently an assistant coach at the University of Toledo.

Known for her loyalty, commitment and dedication, Beeckman was the top assistant coach and recruiting coordinator at perennial NCAA Division II power Ferris State for six years before moving on to Central Michigan. While with the Bulldogs, she helped lead FSU to two NCAA Tournament appearances and six-straight Great Lakes Intercollegiate Athletic Conference (GLIAC) Tournament bids while becoming one of the top assistant coaches in the country after helping FSU average more than 20 wins a season.

“Theresa was not only paramount in my success as a setter, but she was also a support system I relied on,” said former Ferris State standout setter Dr. Samantha Fordyce. “Theresa understands the ups and downs experienced by an athlete and the drive necessary to become something great. Through Tree’s passion and determination, she continued to motivate and inspire me to push myself to the limits and to be better every day. Not only did Tree help mold me as a player, but she helped define me as a person.”

Before her tenure at Ferris State, Beeckman served for four years as the head coach at Delta College and led the squad to a school-record 27 victories in 2004. Under her tutelage, the Pioneers posted the best three-year stretch in their history.

In addition to her head coaching duties, Beeckman also gained administrative experience as the assistant athletics director at Delta College for two years. In her time as an accomplished administrator and collegiate coach, she’s had the opportunity to work with numerous all-conference and All-America student-athletes, earning respect across the nation. Beeckman’s also received certification from the USA Volleyball Coaching Accreditation Program.

Along with her collegiate background, Beeckman also holds experience coaching at the prep level, having served as head volleyball coach at Hemlock (Mich.) High School from 2003-05 and Saginaw (Mich.) Nouvel Catholic Central High School from 1995-2001. Her other coaching stops include two seasons (1999-2000) as the head softball coach at her alma mater, Bridgeport (Mich.) High School, and two seasons (2001, 2004) as an assistant softball coach at Delta College. She’s also been highly active working at various camps and clinics across the country.

A 2005 graduate of Saginaw Valley State University with a degree in psychology, Beeckman played four seasons of softball for the Cardinals and earned all-conference recognition as a catcher in 1997 and 1998. The Bridgeport native was voted as SVSU’s Most Improved Player following the 1996 season and served a year as a volunteer assistant coach in the program following graduation.

A published author and veteran presenter, Beeckman graduated from the NCAA Women’s Coaching Academy in the summer of 2008. She authored an article entitled “Blocking from a Catcher’s Point of View”, which was published in the AVCA’s drill bulletin Volleyball Ace Power Tips. She also was a featured speaker at the Premier Volleyball Academy’s coaching symposium held during the NCAA Women’s Coaches Academy and at other various events, including the Michigan Interscholastic Volleyball Coaches Association’s (MIVCA) annual clinic.

The 1994 Bridgeport graduate competed in volleyball, softball, basketball, and football as a prepster. She claimed softball team MVP Award laurels three times and was named to the Saginaw News All-Area Team twice along with being an All-Tri-Valley Conference honoree.

“As a parent and coach, Theresa is one I would want working with my kids or team,” said Tom Kelsey, of The Coaches Alley. “Theresa Beeckman is the real deal and does an outstanding job. I know she has passion.”

Beeckman, who resides in Big Rapids, Mich., graduated from the NCAA Women’s Coaching Academy in the summer of 2008 and is a renowned speaker at events across the country.

“I can honestly say Tree took me from a good setter to a great setter, and more importantly, an all-around better individual,” Fordyce said. “Theresa will forever be my coach and dearest friend. I was blessed to have my time with her on the court and she is truly one of a kind.” 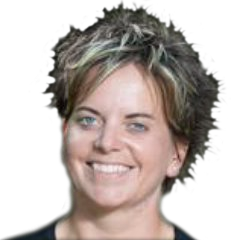 Connect With Me Online!

I’m in the business of sharing “best practices”… so sharing online is what I do. If you want to know more, then be sure to connect and follow me below: